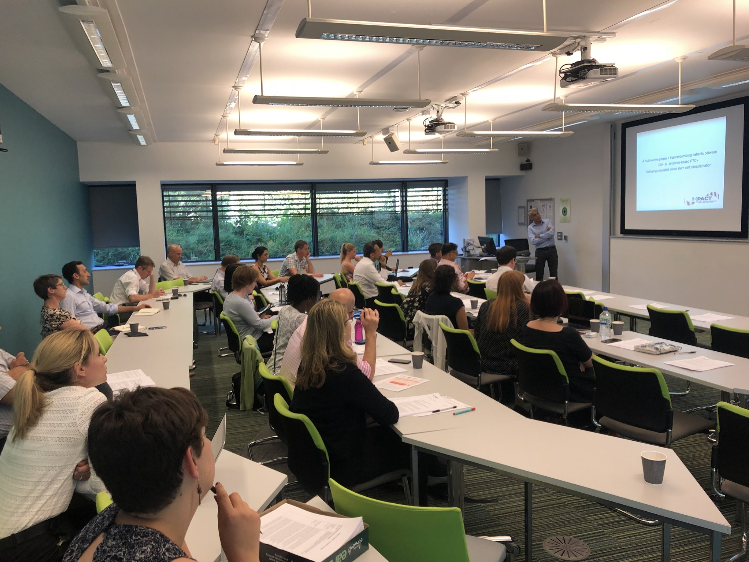 On a sunny day in early July, 30 delegates attended the BSBMT CTC – IMPACT meeting in Birmingham to discuss the IMPACT trial proposals. The day was kicked off by Professor David Marks (IMPACT medical director) with an update on the open trials and a reminder of the need for more myeloma and lymphoma studies to address research questions in the major indications for transplant. David also highlighted the importance of supportive care studies to be developed through IMPACT.

This was followed by an enthusiastic discussion of a trial proposal for a randomised study looking at two strategies for the prevention of graft-versus-host-disease (GvHD) compared to control and another study looking at increasing the number of regulatory T cells in donors as a way to improve outcome in allogeneic transplants. Continuing with the theme of prophylaxis, the third study presented addressed the benefit of antibiotic prophylaxis post allogeneic stem cell transplantation by evaluating quinolone therapy versus a placebo.  The proposals were well received and prompted discussion within the group, who later took a vote on the studies to carry forward.

The afternoon saw updates on the previously approved studies in lymphoma and myeloma and was then followed by updates on the four awarded trials; PRO-DLI (open), ALL-RIC (opening imminently), COSI (to open in autumn) and AMADEUS (to open in early 2019).

This was followed by presentations of new study proposals which predicted risks after allogeneic stem cell transplants. The three proposals set out different approaches of predicting risk and prompted an in-depth discussion of the need to looking at supportive care in the transplant setting. The day concluded with new survey proposals and updates on registry studies. The next meeting will be held in November 2018.